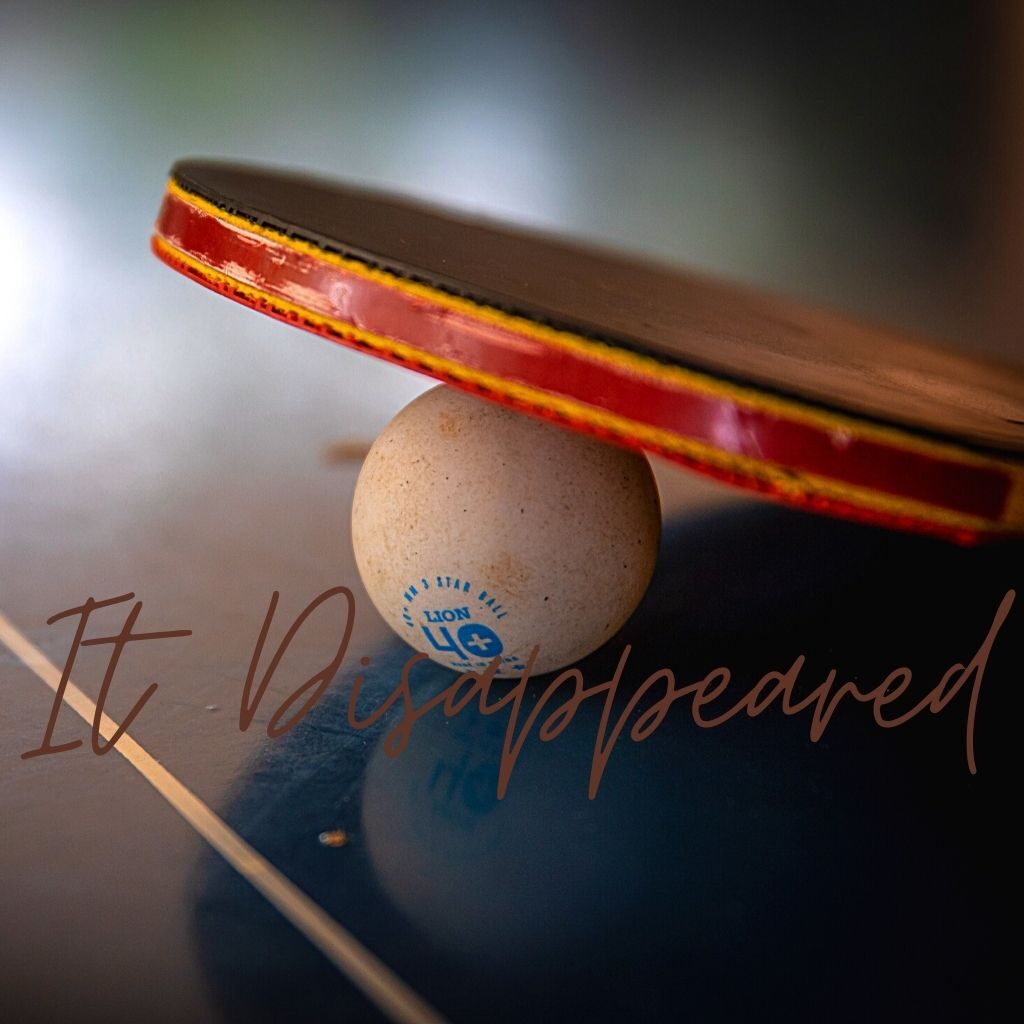 A thought has been intruding upon me lately.  I am not sure why it repeatedly claims my attention, hence I decided to write it here:  I manifested the disappearance of a ping pong ball.

It all began on the first of this month, when our condo’s recreation center was reopened, and I went there to play ping pong and pool with a neighbor.  Since that day, I’ve been going, on most days, to play either ping pong or pool, or both, either alone or with a neighbor.

At the beginning, there were two ping pong balls, one white, one orange.  We played with the white one, because the orange one was dented.  I looked at the orange ball, sitting alone and forlorn on the floor, and I thought, perhaps I could try to nurse it back to good health, by inflating it with hot water.  But that day, I left without taking it home.  The next day, intending to take it home, only to find that it had disappeared.  Maybe someone had performed a retirement or funeral service for it already.

So then we were down to one ball.  Every time I played, holding it in my left hand, a thought flashed through my mind:  ‘When is this one going to disappear?’  Other similar thoughts also appeared, in the duration of our ping pong match:  ‘We need more than one ball.  It’s not safe to be down to only one.  What if something happens to it?  What if I hit too hard and it crushes?  Can it last forever?’

I used to play badminton, and we used to carry a lot of shuttercocks with us. So in my mind, whether shuttercocks or ping pong balls, they all had a useful life. And perhaps that was the origin of my line of thoughts.

In the following days, such thoughts continually imprinted in the white ball every time I held it in my hand.

On the tenth day, I played alone for over an hour.  Usually I don’t have the persistence to play for so long, but that day, I was quite energetic even though I didn’t get enough sleep the few nights before.  I wondered at its significance.

The next day, I excitedly looked forward to another engaging practice session, only to discover that the ball disappeared.  This had never happened before. I looked throughout the recreation center.  I told my neighbor Jon who was smoking outside the building.  He seemed to be quite indifferent, as if the ball had no meaning to him, even though we had enjoyed a fun match previously.

I realized, perhaps I was one of the very few residents in the condo complex who had a strong attachment and relationship to that ball.

So I walked over to Walmart which was about 12 minutes away on foot.  The store was changing its layout, so merchandise and shelves were moved around, and in that transition, ping pong balls were lost in limbo.

For the following week, I checked the recreation center nearly every day, in hope that the white ball would return on its own, as if it had legs or a chauffeur.  But it didn’t.

One day, when I was playing pool with Jon, he suggested going to Sport Chek to buy the balls.  He was pointing south.  I looked at him, puzzled, thinking, ‘A Sport Chek south of here?  Where exactly?’  Then in the course of our pool games, I realized that he was referring to a strip mall north of us.  I told him that I tried to find the balls in Walmart, but couldn’t.  He said Walmart most likely didn’t have them.

For some reason, I didn’t feel particularly motivated to go to Sport Chek, even though I wanted to play ping pong.  It wasn’t far, only 2.4km from my home, which I could easily commute by bike. Yet, I just was not keen to go there.

A few more days went by.  Then I went to Walmart again, to buy notebooks.  It was still shifting its merchandise around, and I practically toured around the entire store in search of the notebooks, but along my tour, I bumped into ping pong balls!  What a surprise!

I bought half a dozen.

The next day, I resumed playing ping pong.  The first thing I noticed was that the new ball seemed heavier and less bouncy than the old one.  Was it my imagination?  Or was my body growing rusty?

By the second day, today, I have grown used to the new ball.

As I gradually adjust my consciousness to this ping pong event, I am beginning to sense the relationship between me and the community property—the first white ball.  From my current vantage point, with the psychological and physical distance, I come to see how I had made it disappear.  It was an old ball, thoroughly tinted with the blue of the ping pong table, yet it was robust and healthy enough to serve in the recreation center for a very long time, until I started to project my negative thoughts onto it, over and over again.

I have seen the results of myself projecting other negative thoughts into other situations.  This isn’t my first observation.  Only that my observation has become louder and clearer.  I’m wondering how I can neurologically skip or overwrite this pattern, because the process of projecting those thoughts is not actually conscious for me in the moment that it occurs.  Only in hindsight, when I am seeing the results do I become gradually aware of the negative seeds that I have been implanting.

Does anyone audit every single one of his thought?  Is it even possible?  How do I shift from projecting to observing?

I started this post with an impinging thought, and am ending it with a series of questions.  Perhaps more ping pong matches would lead me to further discoveries!