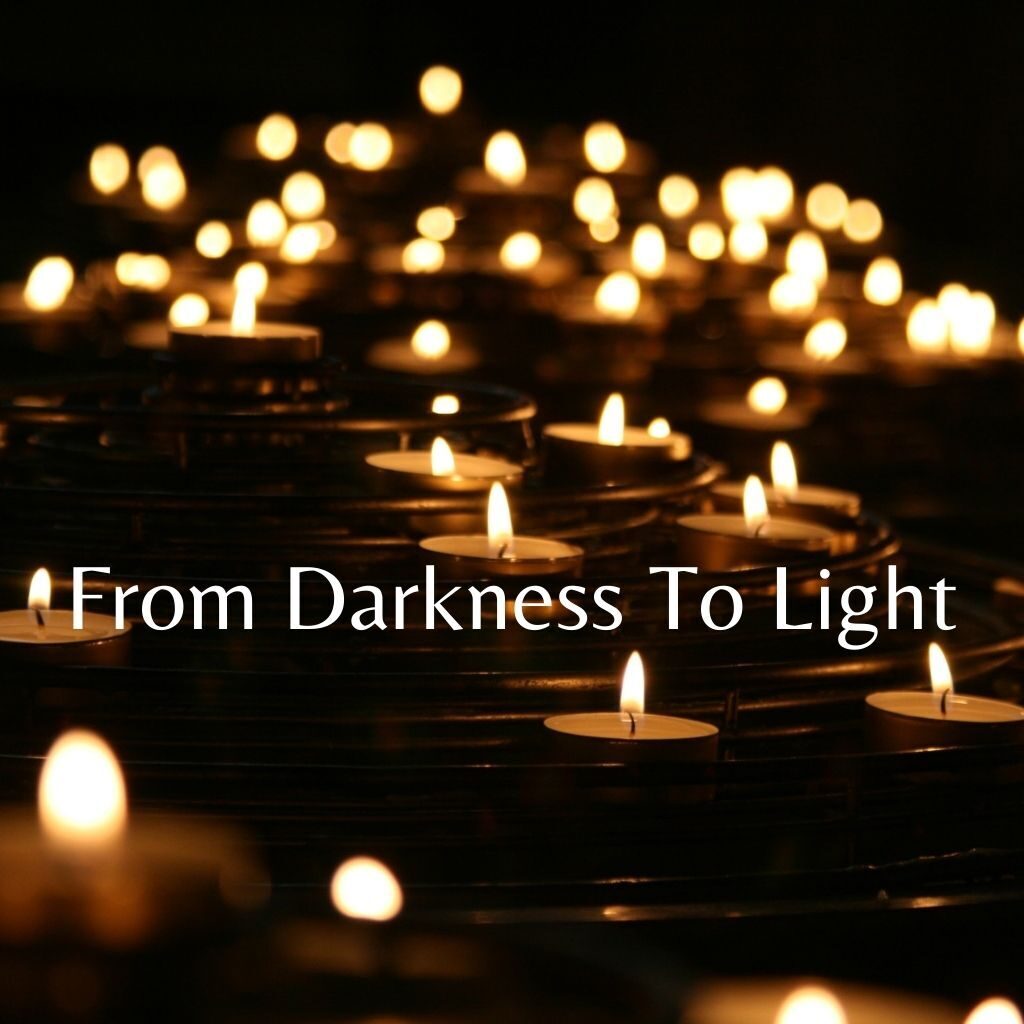 From Darkness To Light

As I played a song on my phone in the bathroom, with the ventilation fan on, I heard someone singing.  The voice didn’t come from my phone, but from my bathroom.  I looked up and around the windowless room, wondering if there was a ghost singing along to the song I was playing.

When I used to live at my parents’, there was poltergeist when I was alone in the house.  The noise sounded as if someone else was in the house, walking or doing something.  I had always dismissed the sound, not giving my attention to it simply because there was truly no other human around, and I wasn’t interested in acquainting myself to the presence of a nonhuman being.

Years later, after some Reiki master had cleared or cleansed my aura, the noise went away.  It was a sudden change.  Here one day, gone the next.  In addition to the quietness, I also felt my own aura lighter and clearer.  It’s like driving behind a dirty windshield for years, and one day someone wiped it squeaky clean.  The view was remarkable!  My perception immediately sharpened, not my five senses, but my other senses. I gained a greater appreciation of the world around me.  Renewed perception.

As I searched for the correct spelling for the word poltergeist, I came upon its synonym doppelganger.  How odd!  I just saw that word a day or two ago when I was searching for books to read.  That word appeared in one of the books’ synopsis.  At the time, I thought doppelganger was a dog, and I thought okay, I would read about a dog.  Now that dog became a ghost. I am okay too.

Just before I woke up this morning, I had a dream about a child who was suddenly possessed by a female ghost, and said something spiteful.  I recognized the tone.  It belonged to a woman I had briefly met (in the dream), like the mother of an ex-boyfriend or something.  Seeing that the woman had some seething anger, my first reaction was to take control of her by grabbing the child’s head.  Then I realized, my hand couldn’t touch the head though I was able to get my hand about one inch above the head.  Around the child’s head, there was something like a magnetic field, a force of resistance, about one inch thick.  A very strong and dense protection.  So I thought, ‘Fine, I won’t touch you.’  Instead, I looked at the child and spoke directly to the woman, in a solemn tone, “Mrs XYZ.”

The woman greeted me, in a friendlier tone.  We exchanged pleasantries, though immediately after I did so, I began to question the point of the pleasantries.  Furthermore, I questioned myself, why would this ghost be bothered with it.  Something didn’t seem right.  No beings other than humans bother with politeness and pleasantries, because superficiality is strictly a human design that has no purpose for other beings in other realms.

So in my waking consciousness, I ponder on these three subjects—poltergeist, doppelganger, possession—all coming to me in roughly the same time frame.  Why is that?  Is there a message here?

With the questions in my head, I took out my deck of divination angel cards.  The cards said that there was no special meaning with the appearance of the three subjects, but there was some healing for me to do with regards to the resistance on the child’s head.  With the guidance of the angels, I did the healing.

After addressing the dream, I gained a bit of clarity on how to discern whether there is something deeper in a seemingly meaningless situation.  When do I heed to the signs, or more specifically, how do I know if something is a sign or just nonsense? When is synchronicity just meaningless coincidence?

If I can breathe through the subject without feeling any tension or force or denseness, then most likely there isn’t anything there for me to pay particular attention to.  If I can feel some emotions or stuckness or something, then that is most likely a clue for me to go deeper.

Although the thought of poltergeist in my own bathroom was a bit unsettling initially, I had already worked through my discomfort, right there in the bathroom.  My psychological hygiene is to transform or cancel any unhealthy thoughts or feelings.  If I just let them run wild, they grow like weed in an unattended backyard, producing tangible destruction such as breaking a bowl, receiving a big fat traffic ticket, etc.

After addressing my discomfort, my perception of the voice shifted. The voice was actually an echo that was produced when the room was closed and the fan was on, and I put the phone in a certain corner. A distortion in perception.

The pivotal point of my life where I veered off from that dark path into a light path, happened around the time I tried angelic Reiki.  Around the same time, my Autosomal Dominant Compelling Helio-Ophthalmic Outburst Syndrome (ACHOO) also went away.  ACHOO is a kind of sneezing triggered by entering a sunlit or bright place from a darker spot.

After veering onto a brighter path, I understood the meaning of paranormal phenomena. It was a projection of the dark seed within me, and when I extricated that seed, my perception changed.