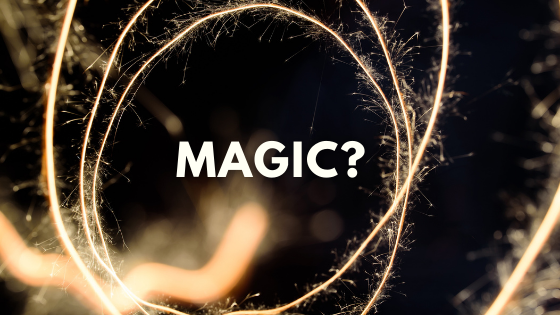 One day, I picked up a card from an angelic deck on divine guidance.  It says Magic!

What is magic?  The card says manifestation.

We manifest every moment of our lives.  We create our environment, our experiences, etc.  When I find myself in an awkward situation, I would ask myself, “What is this?”  I search within me for the thoughts and emotions that are creating my outer experience.  Life presents many such opportunities for my self-introspection.

An example of such is my visit to the gynecologist.  A couple years ago, I was referred to Dr A.  I waited for a long time at the reception area and in the exam room, and when he finally showed up, he stood resting his hand on the door knob, saying perhaps no more than a couple of sentences, not waiting for me to respond or ask questions, the door swung open and he left the room.  Many emotions erupted from within me, some of which were related to feelings of being unseen and unheard.

I found out that I was not the only patient who was dissatisfied with Dr A.  My first response was to shop for alternative.  Then I was told that it would be a long wait to find another gynecologist, as the health care system was short of gynecologists, so the wait might be as long as half a year, which sounded to me more like a discouragement, implying that I should be thankful for what I had and not make a fuss about it.  Again, that triggered some emotional reactions in me, and some of which were related to how I was trained to be quiet and submissive as a child, and not be an inconvenience to my caregiver.

Two years later, I had healed many of the underlying wounds that had constructed the experience.  I was at a point where I had a strong resistance toward seeing a gynecologist, but my family doctor suggested that I should see one.  At the time he mentioned it, I wasn’t sure what to think, because I had so much self-doubt that I could not hear my inner guidance.  So I just said okay, and he again referred me to Dr A.  In that moment, I didn’t object to it, since I was still very lost.  But after I had a couple of days to think about it, I was resolute that I would give Dr A a piece of my mind the next time I saw him.  But that opportunity never came, as another gynecologist had contacted me.  Dr W.

What’s more surprising was that I only needed to wait two months to see Dr W, instead of six!  After booking the appointment with him, I was relieved and happy.  Happy because the universe finally sent me a different gynecologist.  But that elation soon turned into a question that I could not answer:  what would I need a gynecologist for?

In the following two months, I revisited this question multiple times.  The answer was always: I didn’t need one.  It was a safety measure, a just in case arrangement, in case my holistic therapy failed.  Although I was open to any treatment options the gynecologist might offer, I did not wish it to interfere with the alternative medicine that I was on.

Though my intention and preference was clear, my fear was constantly triggered while going through holistic therapy.  This was because I had many blind spots, gaps in knowledge, not fully understanding how the body works, and ignorantly expecting a permanent decrease instead of temporary increase in symptoms during the process.

Gradually, my blind spots were replaced by knowledge.  With knowledge came confidence and trust in the holistic healing process.  As my fear dropped, the need for a just in case arrangement also dropped.

In the midst of all the psychological adjustments, the date of my appointment with Dr W arrived.  The appointment time changed from 9am to 8.45am to 12.30pm to 2pm.  The receptionist said, “We don’t know when he will be in.”  When he was finally in, I was told to strip down and lie under a piece of paper.  While lying down, I contemplated what all this meant, and realized that it was my own indecision that had manufactured this unclear appointment time.

My contradiction was that I was not ready to commit to any treatment, yet was interested in exploring the treatment options.  Realizing that, I asked for angelic advice:  “If you choose the holistic path while having alternate arrangement, it means you are not 100% confident in your choice, and you’re leaving room for failure.”

After realizing my mistake, I re-directed all my attention and energy toward the holistic path.  Then I asked myself, “So why am I still here?”

The answer that eventually arose was startling!  It was out of a sense of fear and guilt. If I did not follow the doctor’s suggestion and something were to go wrong with my body, I would be blamed, for my ignorance or whatever, and I would be seen as undeserving of care and support.  My fear of condemnation, along with it, psychological imprints of being shouted at, vehemently, with despise and disgust, for not following other people’s order led me to follow the doctor’s suggestion, even when it went against every cell in my body, I still pushed myself to follow it.

When I realized the wound and its effect, I put my clothes on.  Without seeing Dr W, I stepped out of the exam room, at 2.25pm.  I no longer needed to manufacture that experience.  But I was deeply grateful for the opportunity to see what caused it.  After replacing what no longer serves me with all the good things like joy, love, trust, I look on to my future with exuberance, knowing that I will be manufacturing happier experiences.