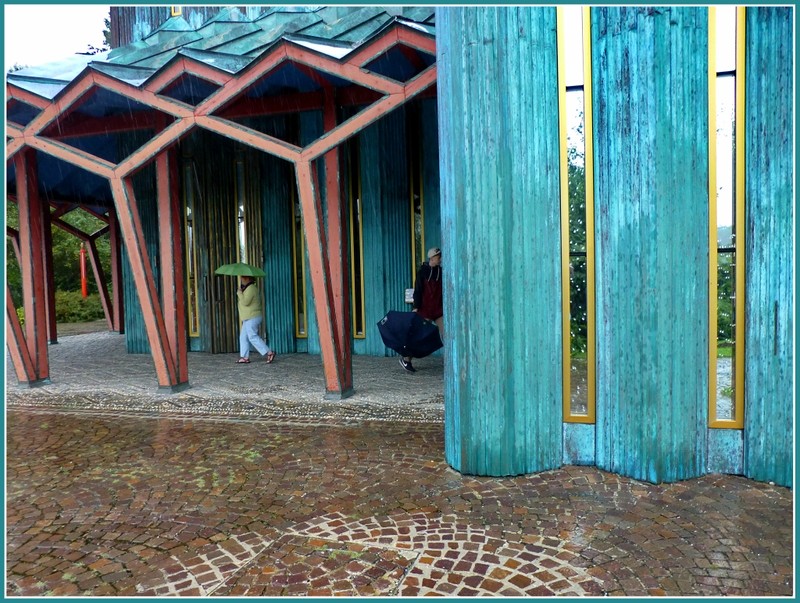 Report on trip to Austria, part 2

7-th day. The Church Ernst Fuchs
The Church Of Hundertwasser
Glass manufactory in Burbage.
By the way, this tank is in the center moved in my collection of vases.
The Eggenberg Palace.

I’m planning a separate posts about all the above.
The weather that day was disgusting. The temperature dropped, the rain periodically began to pour in buckets. I tried on the way to remove fields with pumpkins, – Styria is famous for the production of pumpkin oil, pumpkin grow here everywhere, and the fields look very cheerful – but the rain muddied glass. And nothing but a light orange stain outside the window of the car, did not work.

Traudl very tired that day. Winding road, lots of tunnels, heavy rain. Of the morning news the next day revealed that in some places in Styria, even the snow fell, and the roads there were many accidents, including and with sad outcomes.
Therefore, the following,
8-day was a day of rest. We did not travel outside of Mürzzuschlag. We just walked around the town, visited the Museum of Brahms, ran to the shops. In the evening we received a gift from Traudl on the excellent bottle of pumpkin seed oil!

9-th day. In the morning we said goodbye to the nice Mürzzuschlag and sailed back to Vienna, where the first thing rushed to KHM to watch Brueghel.
Well, of course, not only Brueghel. A lot of things, and other interesting. After KHM, I fulfilled a mother’s duty and led my child to the Technical Museum.

I was found very interesting:
Once, in a past life, the subject of my dissertation included the prosthetics of the lower extremities. There were many interesting things on this topic in the Museum

We took to the Museum’s closing time and, frankly, not enough…

Nastya, instead of the Museum, went to Albertina. In her heart, knocked “the ashes of Klaas» the hare of Durer.
She saw the hare and the impressionists, and was perfectly happy. In this good mood she went to visit Tanya, where they watched a film about the theme of the Impressionists.
Stas and I went in search of Gazometro, and 20 hours had Daytona the Museum of sounds ( House music). On the advice of Traudl got off at the station and drove to the station on. But gone, apparently, in the wrong direction, went long and circles ))).

The long-awaited gasometry..
So, gasometry we won!
It’s time to the Museum sounds. In the subway we got off at the right stop, and then we could not navigate. “House music?, – happily asked the tourist-Spanish – follow for us!” And we boys ran after the Spaniards. This house fled to a crowd!)
and the house was not the same…To “our” house we came at 8 PM and 15 minutes later. And time for the examination of a large heap of interactive exhibits seemed to us too little.

10th, the last day. Stas was in a deep sleep, Nastya and I went to the flea market, which operates exclusively on Saturdays ( the other days they sell food and stuff). The Vienna market called the Naschmarkt. In someone else’s story I read that a very appropriate name, because this “Markt” clearly “ours.” Fully confirm, – the number of Russian merchants “was through the roof» ). The market is located a pair of kilometers in length.

Nastya said it’s no good idea without a purpose to wander around the market, it is necessary to determine their desires. I wanted a little vase, a little doll and something for my soul ))). Nastya – wanted to find vintage jewelry and one definite book. From the market she left a few sad, because nothing found. However, she did not know which moral compensation is waiting for her in the evening. My program was 100% complete. Now I am the happy owner of three subjects about which I know nothing, but they like me by the way, if among you there are experts and will tell anything. Unlikely, of course, but suddenly…

So it will be placed. The vase ))) Rather, a bottle of perfume. Judging by the picture, refers to the modern era. Similar analogues in the Internet is not
found. But they found exactly the same cover, which, oddly enough, do not refer to modernism and to him the preceding Victorian era. I admit that the cap may not be native. Although the size is suitable. Best of all, from the cap and from the bottle, still exudes a slightly noticeable subtle perfume “Bouquet de Nice” ) now Dolly.

Originally wanted another. But that was sold only in pair with the boy in national costume. Not mine… I sighed, rummaged in the box and pulled out the tucked under the larger and more prominent of the beauties of this one:
She got me hooked. Probably a bow ))) Doll celluloid, sold as pre-war. I am not an expert, so I asked about its origin in the community on Facebook. Replied that the products of the factory “Minerva”. Maybe post-war, and maybe pre-war ))) And then my post deleted. Mess ))) Because a bunch of questions I was left with ) the information found in this factory: closed in 1955, the mark besides the word Germany starting from 1933 there was an inscription of Minerva. From what I have it isn’t there, a doll made earlier in 1933. I am silent, I see her all the same style ))) But there was a bunch of “but”: all the little dolls Minerva, whose photos have found have molded hair, my doll had real hair. And a stamp in the upper right part of the same (like a helmet), but all that’s left under this hat, unlike. However, in that Minerva joined a few other, smaller factories. Possible that done on one of them. But with a year to decide and failed. I want to determine at least a decade )))And the third thing ) Which for the soul ))) I don’t even know what it is ) as condition things is bad. But I fell in love with her at first sight ))) My little hands reached out to her, unable to break away ) the Salesman said that this Bedemier. Somehow trusted him right away ).

At first I thought it was a handbag. And in form it resembles, and flanked by two decent holes, as if a pen from her threw up. But after scrolling through books on fashion history, I started to doubt. All handbags of this period in the books of cloth knitted or made of a metal mesh, and leather that is not visible in the book. Maybe it’s not the bag, and some road four wheel accessory? I asked the expert on the history of costume. She said she’ll think about it. But it is silent, she is silent as the guerrilla on interrogation. Already I do not expect an answer.Well, okay, it’s time for us to leave the “flea market” ))) and return to the apartment to pick up my son ))). Secession was on the way.And anyway, this whole quarter of solid art Nuovo. Art Nouveau, as they call it here.
All together with Stas go to the House of the Sea. Price hoo! Well, there are some interesting… Although the St. Petersburg aquarium is much better. And the price is lower. Nastya it was not yet, because the House of the sea her unconditionally love.

What is good in the House of the sea is the viewing platform.In Schönbrunn with its palace, zoo and other delights son refused to go, early in the morning by choosing a replacement – the House of the sea. “No luck in cards, lucky in love…”, I mean so lucky in the morning on “the flea” because it is foolish to think that the rest of the day will also carry. Really, the second Museum today son chose MUMOK (Museum of modern art). Well, I did not like…

By seven PM we were home. Packed up for departure, waited, Traudl, which, like a the good kind fairy, came to us with gifts. And, most surprisingly, Nastya received the gift of the book with watercolor paintings, a book which dreamed! With a bottle of sunny spanish “Rioja”, Traudl told us absolutely incredible story of finding this book. So, miracles do happen and dreams come true. Especially when the good wizards try your hand )))
And wait for stories about the individual, only indicated here, landmarks )))